REICHSTAG USA and WAG THE DOG 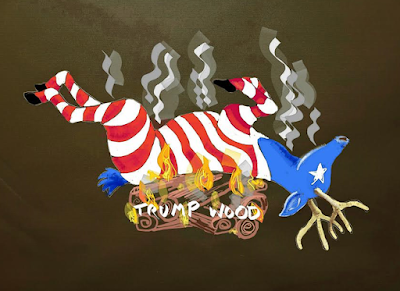 TRUMP WOOD?
TRUMP WOULD?
The Reichstag Fire is an example of a false flag operation.  It describes a
terror management event that deceives a people
into believing they have been attacked by enemies.
It becomes an excuse to disable civil liberties, freedom and attain power.
One example (there have been many in early and recent history)
is the Reichstag Fire of  February 27, 1933.
Hitler won Parliamentary elections because he stated the fire was
set by Germany's enemies.  Rights of the citizens were
suspended to allow the police to do their job.
http://www.slate.com/articles/news_and_politics/fascism/2017/04/preparing_for_an_american_reichstag_fire_how_modern_authoritarians_consolidate.html
"Tyranny arises on some favorable emergency."
James Madison
Introducing our new cultural analyst-
Tofu, the rescued greyhound.﻿ 
﻿
http://opinionarted.com/home.html for art with some nasty attitudes
If you're not already on the email list and you don't
want to miss a performance on this blog,
leave your email address at "CONTACT FOR"
also please SHARE WITH OTHERS.  SHARE WITH OTHERS
Stephanie